This scale was devised by Lennart von Post during his work on the 1926 Soil Survey of Sweden for measurement of degree of decomposition of dead plant matter such as Sphagnum moss.    Using parameters such as fibre integrity, colour and viscosity of exudate, and presence of colloidal particles, it creates a descriptive framework across a wide range of organic soils, and assigns a numerical value from 1 (undecomposed) to 10 (colloidal).  The USDA / FAO compressed von Post’s 10 steps into three levels (fibric, hemic, sapric) thereby reducing its diagnostic usefulness at field scale. 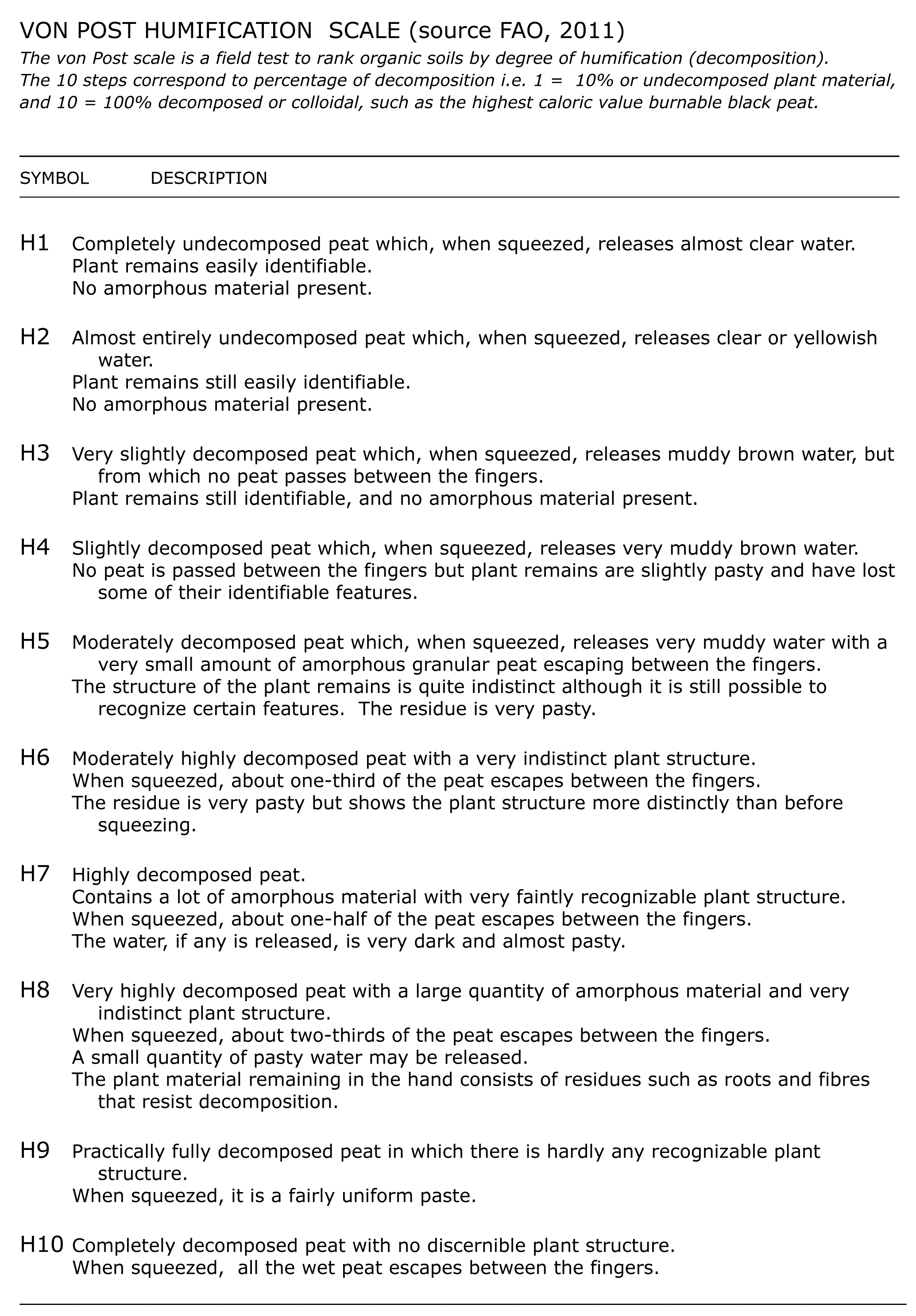 The von Post scale is simple to use: a handful of wet soil (small enough to cover with the fingers of one hand) is squeezed very hard, until as much as possible has extruded through the fingers.  Colour and viscosity of exudate, proportion and condition of remaining fibre and other qualities are noted; a score is assigned according to the table above.  Some experience is needed to use the method, as the actual instructions appear to exist only in Old Swedish; bowdlerised versions with the hard words left out were found on the Web.

This elegantly simple test clearly describes the continuum found in the research areas, from a sponge-like catotelm with nearly unlimited hydraulic conductivity to impermeable black peat.   Although Sphagnum when left to itself passes from fibre to colloidal paste with no intermediate crumb stage, the von Post score correlates strongly with other characteristics of good soil functionality.  It showed strong statistical relationships with soil depth, colour, K, pH, ash, hydrology, and smell, emphasizing its predictive value as a multi-variate indicator for field analysis.  It may also indicate topographical or hydrological conditions that support or impair land restoration.  In the research areas, desirable plants (forage grasses) grew most strongly in areas with von Post scores between 7 and 9.

The von Post scale replaces the soil textural triangle as a baseline for description of highly organic soils, and was shown to relate ‘humification’ to other measurements of soil functionality. Alone of descriptive techniques found in the literature, the von Post scale provided a rapid, sensitive and multi-variate method for characterisation of blackland soils in the field.